Last time, we introduced the two major tree searching algorithms, which are breadth first search (BFS) and depth first search (DFS). Today, we’ll be going over a couple of practice problems to help us solidfy our understanding of these two important algorithms. We’ll go through these two exercises step by step.

Given a standard 8x8 chess board, find the minimum number of moves that a knight must take in order to reach a particular destination square from a given source square on the chess board.

This problem is adapted from Techie Delight.

For this problem, please navigate to the repl.it repo linked here and fork the repl.

In the game of chess, the knight is a chess piece that has strict requirements for how it can move. Namely, it must move either (1) two square vertically and one square horizontally, or (2) two squares horizontally and one square vertically. You can read more about the knight on Wikipedia. Here is also a helpful diagram from Techie Delight that illustrates the valid moves for a knight with red X’s. 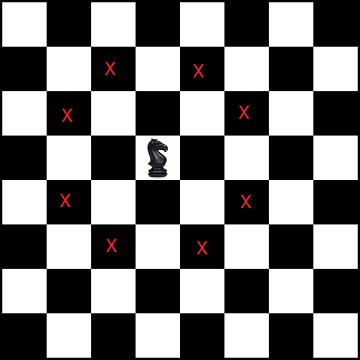 The word ‘minimum’ tells us that we should use the BFS algorithm for this problem. To sketch out our approach, we can represent each of the 64 squares of the chess board as vertices in a graph, with edges connecting squares that a knight can directly reach in exactly one move. We’ll start at the source square, and then use BFS to explore the board until we arrive at the destination.

The first thing that we need to do is write a Java class that will represent each of the vertices in our graph. In our implementation, these vertices will be Knight objects, which you will implement in the Knight.java source code linked above. Our Knight objects have to keep track of the x position on the chess board that this node represents, the y position on the chess board, and the number of steps that the knight has taken so far. Note that x and y must both be between 0 and 7 inclusive because a standard chess board has 8 by 8 squares.

Problem 1: Read through the starter code to make sure that you understand its structure. Implement the constructor, getX(), getY(), and getStepsTaken() functions in Knight.java. These should be fairly straightforward.

There is one more function that we need to implement in Knight.java: the move() function. This function is important because it will ultimately help us move from one square to another on the chess board. This function takes in a Knight k and a “move number” n (described below) and generates a new Knight node object to represent that chess move to the new square. A couple things to keep in mind as you’re writing this function:

At this poit, we’re now finished with our Knight.java implementation. Let’s turn our attention now to Main.java. When implementing BFS, recall that we don’t want to visit the same chess square twice. To ensure this, we have a HashSet of Knight objects called visited, which will keep track of Knight objects that we have already visited. We want the seen() function in Main.java to return whether or not the argument Knight k has already been visited before, through making appropriate usage of the visited set.

Now comes the main part of this exercise: implementing the BFS algorithm in the minSteps() function. This function takes two arguments: src source square coordinate and dst destination square coordinate. Both of these cooredinates are int[] objects in the form { x-coordinate, y-coordinate }. This function should return the minimum number of moves the knight needs to take to get from src to dst. If it isn’t possible for the knight to get to dst using only valid moves, then you should return -1.

You have now implemented BFS to solve this problem! Try running your code now to make sure that it works. If the program works as expected, you should get the following output:

This is just one test: feel free to write your own if you’d like! After you get this working, feel free to try out the extension/challenge problems starting here. The first thing that you should do is change the SHORT_TEST boolean in the main() function from true to false. This will ensure that the driver program doesn’t just run the simple program tests, but also the extended program tests as well in the rest of the main() function.

Last time, we discussed a couple of the practical differences between DFS and BFS algorithms. Namely, while BFS always gives us the shortest, optimal solution, DFS typically gives us a faster solution that requires less time to compute. Let’s try to explore this and see if this is the case here. Note that the DFS algorithm will only give us one possible route for the knight to get from src to dst, not necessarily the shortest possible route.

The first thing for us to do is to actually implement the DFS algorithm:

Challenge 1: Implement the findPath() method in Main.java now. This should be very similar to the minSteps() method that you implemented above, with the exception that this new function should implement the DFS altorithm as opposed to BFS.

After you complete this implementation, try running the driver code once more (again, ensure that SHORT_TEST is set to false in the main() function). Based on your results, answer the following questions:

Based on our solution code averaged over 10000 tests, we determined that the average path length found using DFS is 29 moves for the knight, while the average path length found using BFS is 2 moves. We know that BFS always yields the shortest, optimal solution, so this empirical result makes sense. What may be somewhat interesting is that the BFS algorithm takes less time to run compared to the DFS algorithm on average. For example, in our sample run, the DFS algorithm took about 1000 microseconds, while the BFS algorithm took about 400 microseconds. This may be surprising because theoretically, BFS should take longer to run than DFS. The reason for this descrepancy is that the BFS-derived optimal path is significantly shorter than the DFS-derived path, and so in this particular case, the number of nodes that DFS has to go through on average make the algorithm perform worse than expected compared to BFS.

It might also be useful for us to be able to print out the moves that the knight will take in order to get from the source to the destination. This is a pretty tricky feature to implement and completely optional, so feel free to try it out if you’d like! Otherwise, let’s move on to the next problem.

This problem is adapted from Program Creek.

Similar to above, navigate to the replt.it repo linked here and fork the repl.

A word search is a common type of puzzle where we try to look for words in a matrix of characters. For example, consider the following matrix:

Similar to the chess knight problem from above, we’l break down this problem into smaller pieces to tackle. The first thing that we need to do is sketch out an approach to this problem. We’ll represent the word search matrix as a char[][] matrix, and keep track of the word we’re looking for as the variable SEARCH_WORD. Because we just want to check if the word is contained, and we’re not looking for an “optimal” path, this suggests that we should use DFS for this problem.

For the first part of this problem, you will implement a “deep copying” function to make a new copy of an input matrix. It isn’t clear yet why we’ll need this function, but rest assured we’ll use it in the near future.

Problem 5: Read through the starter code to make sure that you understand its structure. Then, implement the function deepCopy(), which takes in a boolean[][] matrix and returns another boolean[][] matrix that has the exact same elements. You can read about what exactly "deep copying" is here.

After you’ve completed this step, it’s now time to implement the recursive DFS search algorithm to look for the word of interest SEARCH_WORD in the char[][] matrix. You should complete this in the search() function in Main.java. But first, a couple of things to keep in mind:

That’s it! All that’s left is to run our code and see if it works as expected. We have already provided the driver code in the main() function in Main.java. A sample test word search board and search word is provided. If you run the code, you should expect to see the following result: