The fact that the length of arrays cannot be modified is a pretty big limitation. What if we don’t know how many elements will have at the beginning? What if we want the length of our list to change in response to something that dynamically happens in our program? For these reasons, we have ArrayLists, which build on our arrays by being able to change their size.

Other methods can be found in the official Java documentation.

Last time, we talked about the structure of a list, which we defined to be an ordered array of elements. Arrays had the limitation of having an immutable size and capacity. If we had an array that could hold a maximum of 10 elements and want to add an 11th element, we would have to create an entirely new array with a larger capacity. ArrayLists were able to overcome this limitation by featuring a mutable size and a capacity that could be expanded “under the hood.”

Remember that both arrays and ArrayLists featured contiguous elements. This means that the (i)th and (i+1)th elements are right next to each other in the computer’s memory. For example, let’s say we had an ArrayList that looked something like

Imagine if we wanted to remove the element data.get(2), which is equal to 7 according to our code. Because elements in arrays and ArrayLists must be contiguous in the computer’s memory, once we call data.remove(2) to remove the second element not only do we have to remove the element 7, but we also have to move the element 0 (the third element) one position to the left, and then the element 4 (currently the fourth element) also one position to the left. This essentially involves copying and moving two elements around. For this simple example, this isn’t too big of an issue. However, what if our data set was much larger? What if data contained 10 million elements, and we wanted to remove the 0th element? Or if we wanted to add an element at the very beginning of the ArrayList? All of a sudden, these processes will start to become very slow because they involve copying and moving so many different elements.

Fortunately for us, LinkedLists provide a better, more time-efficient alternative. LinkedLists are another implementation of the list structure that we talked about previously. The allow for us to store data elements of the same type in an ordered fashion, and from the outside, will look and act exactly like any other type of list. However, LinkedLists have the one caveat where list elements don’t have to be contiguous. Rather, list elements are now called nodes that store a pointer to the next element in the list in addition to the data entry. For now, we can think of a pointer as an arrow that points to the next element. To create a LinkedList, our Java code might look something like this:

Here, everything looks the same, but we now also have the pointers (denoted as arrows in the diagram) that point to the next element in the list. Imagine if we wanted to remove the element data.get(2), which is equal to 7 according to our code. Calling data.remove(2) to remove the second element only requires two operations: removing the pointer from the 7 to the 0, and “rerouting” the pointer from the 2 to the 0. Therefore, after calling data.remove(2), our LinkedList might look something like this:

The benefit of a LinkedList is that all of the data elements stay in place! This means that we don’t have to move anything around. All we need to do is update which direction the pointer is pointing. As another example, say we want to add the element 10 to the beginning of this list. After calling data.add(0, 10), data would look like 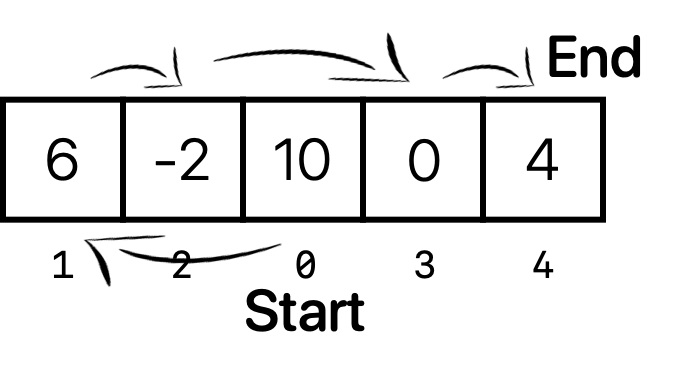 Again, nothing had to move! However, note that one limitation that arises with LinkedLists is that if we’re trying to look for elements or access elements of the list, we always have to look through all of the elements before our desired element of interest in order to get the pointers to know how to traverse the list correctly. This is because the list nodes are not necessarily contiguous anymore. As a result, if your element is at the end of the list, you’ll have to traverse through all of the elements in the list before you can access it.

DNA is composed of four different types of “building blocks,” which we’ll refer to as A, G, C, and T. A valid DNA sequence will be composed of these four types of characters, which can be either uppercase or lower case. For example AcTggCGa is a valid 8-character DNA sequence. Fill in the following methods for our class representation of DNA below:

Note: In order to write the toComplement() method, please visit this link to understand what a DNA complement sequence is. The relevant snippet is included here:

This is the expected output so you can check your work:

In this problem, we will investigate the differences ArrayLists and LinkedLists we talked about earlier. More specifically, LinkedLists are much faster at inserting and removing different list elements, while ArrayLists are much faster at accessing and writing to different list elements. First, create a new Java class called Compare.java, and copy-paste the following code.

You do not need to modify the code in any way. After you have done this, answer the following questions.

Make sure to repeat steps 2-4 a few times to make sure you get reproducible results. Your outputs will very likely not be the same between runs, but they should be within the same order of magnitude.