Physics problems involving mechanical equilibrium are very common in introductory physics classes. For this reason, we will practice doing a couple of these problems today.

This problem is adapted from Caltech's Ph1a course. 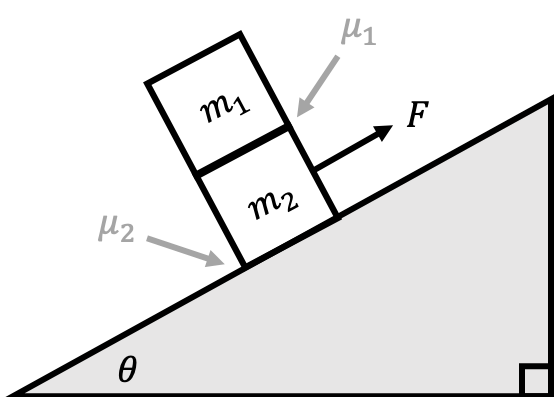 This problem is adapted from Caltech's Ph1a course.

A rope of length $2l$ and uniform density (here: mass per unit length) $\rho$ is hanging over a nail in a wall with a piece of length $l$ on both sides. Friction, the thickness of the nail, and the thickness of the rope are negligible. When one creates a slight length difference between the two sides, a net force will start to act on the rope, and it will slide off the nail, faster and faster.

Example 3: Pulley on an Inclined Plane

Two blocks of mass $m$ and $M$ are connected via pulley with a configuration shown below: 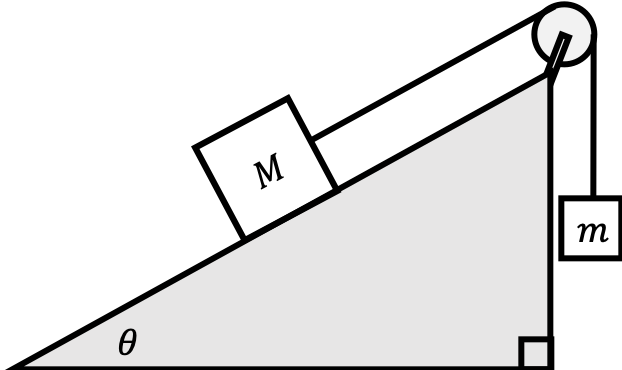 The coefficient of static friction is $\mu_s$ between the block and surface. What is the minimum and maximum mass $M$ so that no sliding occurs?

This problem is adapted from this link.

A block of mass $M$ is pulled using a pulley at constant velocity along a surface inclined at angle $\theta$. The coefficient of kinetic friction is $\mu_k$, between block and surface. Determine the pulling force $F$.

This problem is adapted from this link.

A block of mass $m$ is lifted at constant velocity using the two pulleys shown.

Determine the magnitude of the pulling force $F$. Ignore the mass of the pulleys.