In this blast from the past, we’ll be looking at Newton’s laws once more, but this time in the frame of rotating objects.

Over the past couple of lessons, we’ve been interested in describing the motion of objects whose motion can be described as piecewise linear. This means that the objects are more or less moving in one direction for a particular interval in time, or the objects’ trajectories can be described nicely by breaking it down into the substituent vector components. Today, we’ll be introducing the mathematical formalism of describing rotational motion, which describes circular motion around a center point or axis. 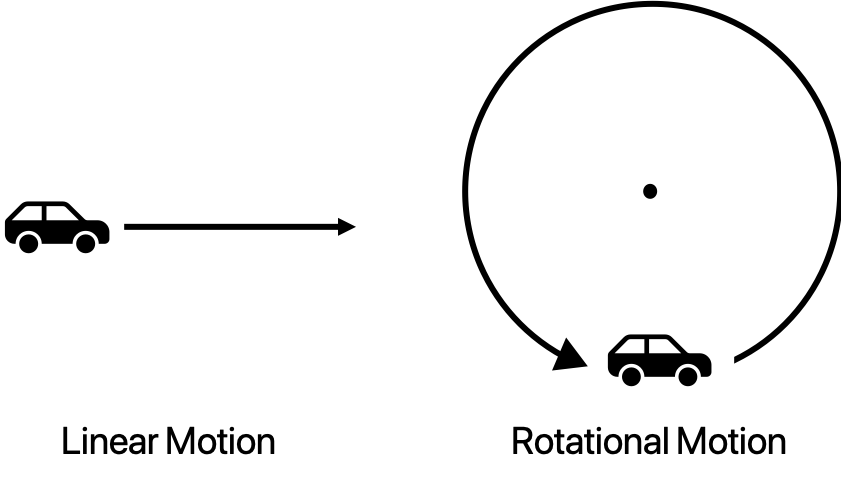 At first pass, it might seem like these two types of motion should be described in very different ways. This is because in linear motion, we can have motion under constant velocity, but when studying rotational motion, everything is always accelerating because the direction of motion is always changing as object move around in a circle. However, as we will see, much of the formalism from Newton’s Laws can be re-adapted to describe rotational motion as well.

The first thing we need to do is identify the variables and quantities that are of interest to us when talking about rotational motion. In studying linear motion, the most important concepts where the position $x$, the velocity $v$, and the acceleration $a$. In rotational motion, the instantaneous position, velocity, and acceleration of a rotating object is referred to as the tangential position, tangential velocity, and tangential acceleration, respectively. Each of these quantities has its own corresponding analog: angular position $\theta$, angular velocity $\omega$, and angular acceleration $a$. 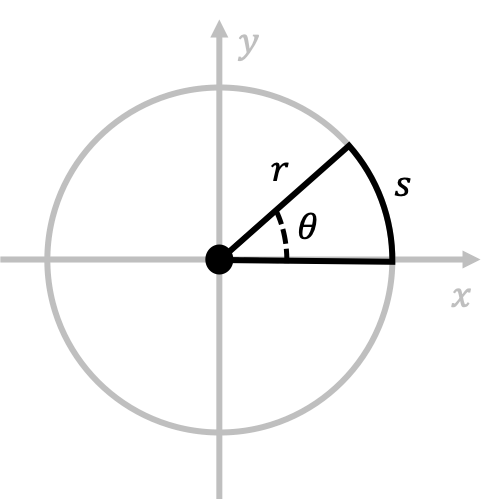 In this diagram, we have also introduced the variables $s$ and $r$. Here, $r$ represents the radius of rotation, while, $s$ represents the arclength distance on the circumference of the circle subtended by the angle $\theta$. To relate $s$, $r$, $\theta$, we can note that as $\theta$ increases, $s$ should increase by a proportionate amount. Therefore, we would expect a relationship between $s$ and $\theta$ that looks something like

This allows us to conclude that \(s=r\theta\). If we take the appropriate time the derivatives of this equation, it is not hard to see that $v=r\omega$ and $a=r\alpha$. This tells us that tangential quantities are related to their rotational analogs by a proportionality factor of $r$. To summarize,

Cartesian coordinates and polar coordinates are two equally valid ways to represent points in two dimensions. Because we are dealing with circular trajectories in rotational motion, it is often more convenience to work in polar coordinates. In our case, because circular motion only involves motion along the $\hat{\theta}$ direction in the diagram above (since $r$ is a constant), this means that angular displacement vector $\Delta \vec{\theta}$ should be in the $\hat{\theta}$ (or $-\hat{\theta}$) direction. 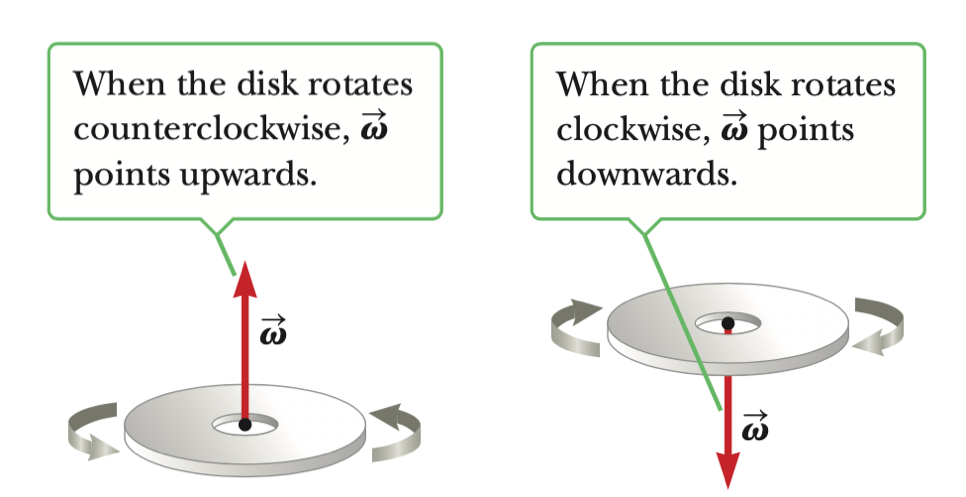 We typically denote the directions “upwards” and “downwards” as $+\hat{z}$ and $-\hat{z}$, respectively.

Using the relationship $s=r\theta$, we can derive a useful set of kinematic equations that describe the motion of rotation for any rotating object assuming that the angular acceleration $\alpha$ is some constant value.

As some object is rotating around in a circle, we can treat $s$ as some physical distance that should obey the kinematic equations that we derived previously for systems with constant acceleration. This means that, assuming the object isn’t speeding up or slowing down, we should have

This looks exactly as the linear kinematic equation, just with $\theta$’s substituted for $x$’s! Using this rather convenient result, we can also similarly prove that the rest of the kinematic equations also have their rotational analogs.

These are our kinematic equations for rotational motion! Note that, assuming that $\alpha$ is constant, every part of the rotating objects will always have the same angular speed $\omega$! This is in contrast to the tangential speed $v$, which scales as the radius $r$ away from the center increases. This means that, assuming constant angular speed $\omega$, an object rotating far away from the center of rotation will have a much faster tangential speed than an object rotating close to the center of rotation.

One caveat: while our results are correct, our method of proving them isn’t necessary rigorous. This is because we assumed that the arclength quantity $s$ obeyed the linear kinematic equations that assumed constant acceleration, but this is technically not the case. Because a rotating object is always changing direction, and therefore changing the direction of its velocity, a rotating object always has time-varying acceleration. This means that we cannot easily use the linear kinematic equations to describe the time dynamics of $s$. Luckily for us, so long as the speed of the rotating object is not changing, the math still works out to give the correct results in a fairly physically intuitive way, and an analytically sound proof is rather hard to explain.

Let’s look at the the average acceleration for when a rotating object moves at constant speed during circular motion. As we have said above, although the speed of the object isn’t changing, the direction is, and so the object is still accelerating! Our goal is to find the magnitude and direction of this acceleration, which we call centripetal acceleration.

By definition of average acceleration, we know that 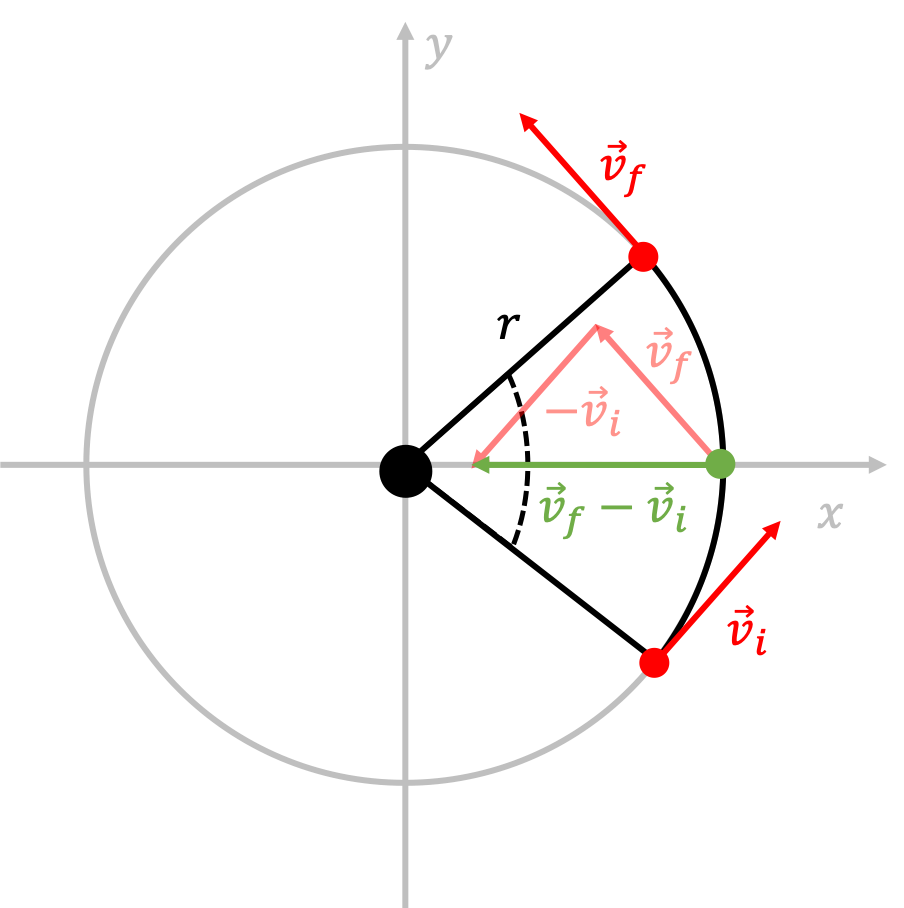 As we can see, in this particular case, the change in velocity \(\Delta \vec{v}=\vec{v}_f-\vec{v}_i\) from the average position along the trajectory from time $t_i$ to $t_f$ is pointing radially towards the center, as shown through the direction of the green vector $\Delta \vec{v}$. In this particular case, the average position in this time interval is on the $x$-axis, but it turns out that the average acceleration between any two time points $t_i$ and $t_f$ always points towards the center! You can draw a few additional diagrams like the one shown above to confirm that this is indeed always the case.

We also are interested in the magnitude of the centripetal acceleration $\vec{a}_{\text{avg}}$. To do this, let us take the angle $\Delta \theta$ subtended during the time interval $t_i$ to $t_f$ to be very small. 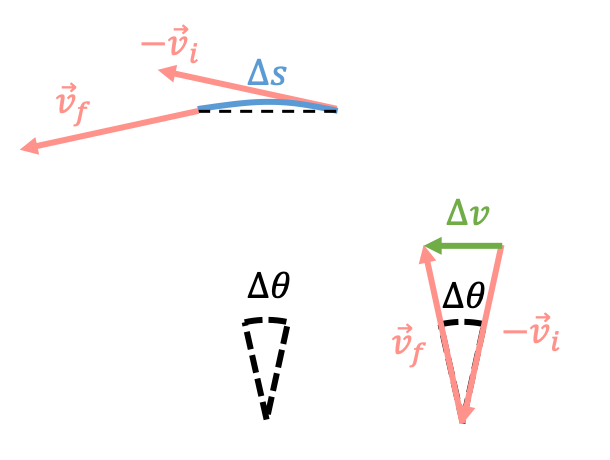 Therefore, we have shown that the centripetal acceleration of a rotating object is given by

What is Centripetal Acceleration? 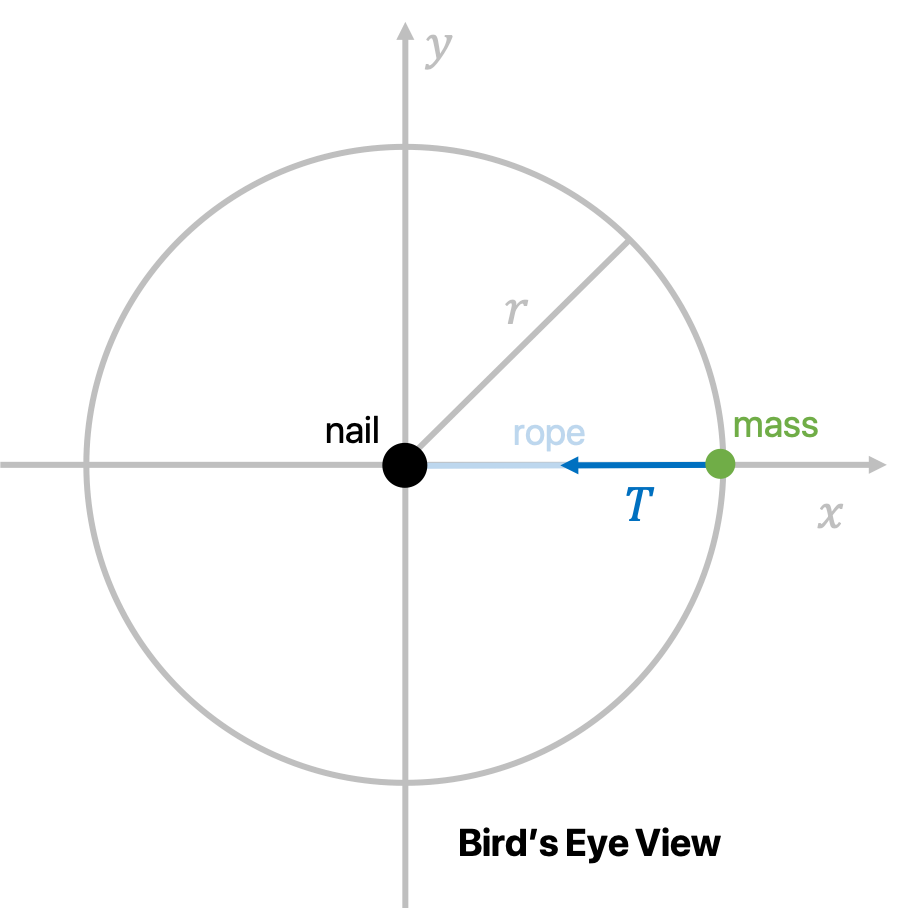 Let consider a scenario where we’re trying to do something simple: open (or in other words, rotate) a door. This is what it might look like from a bird’s eye view (picture taken from Serway Physics 9ed):

When we are opening the door, the things that dictate how fast the door “accelerates” open are

Obviously, if we push on the door with the strength of Bruce Lee with large force, the door will rotate with a greater angular acceleration. Furthermore, we know from personal experience that it’s easier to push on a door when we push it far away from the hinge, rather than close to the hinge. In other words, we would expect the torque to be proportional to both the vectors $\vec{r}$, the displacement from the center of rotation, and $\vec{F}$, the force that we apply on the door. Indeed, this is the case: the torque $\vec{\tau}$ is defined by the vector relationship

As we can see, torque is a vector quantity and is denoted by $\vec{\tau}$, which is defined to be the cross product between $\vec{r}$ and $\vec{F}$. From this equation, we can see that the units of torque is $\text{N}\cdot\text{m}=\frac{\text{kg}\cdot\text{m}^2}{\text{sec}^2}=\text{J}$. If you’re familiar with what a cross product is, feel free to skip the next section.

In this section, we’ll introduce the idea of cross product just enough to motivate our understanding of torque. If you’re interested in a more thorough introduction, I suggest you visit this website.

The magnitude of the cross product is given by the equation

The direction of the cross product is defined to be the direction perpendicular to both vectors $\vec{a}$ and $\vec{b}$, and is given by the right hand rule.

Finally, there are two important properties about the cross product:

and of course, because any vector is parallel with itself,

Let’s go over a couple of common examples that you might find when taking cross products in the context of calculating torque:

Simplifying, we find that

Now that we have the basic framework of torque and angular quantities, we can also formulate a set of Newton’s Laws describe the classical motion of any object. They are:

For rotating systems, the work $W$ due to a torque $\vec{\tau}$ is defined by

The first definition above is in 2- or 3- dimensions and is the more general case (we will talk about how to actually evaluate such an integral later). You will most likely find the second definition of work given more useful. Similarly, energy $U$ is defined by

A satellite of mass $m$ is said to be in geosynchronous orbit around the Earth of mass $M$ and radius $r_0$ if it always is above the exact same location on Earth all the time. In other words, the period $T$ of orbit of the satellite is 24 hours, which is the period of the rotation of the Earth.

Although we have not officially discussed this yet, the force of gravity $\vec{F}_g$ between two objects of mass $m_1$ and $m_2$ in space is given by

where $G$ is called the gravitational constant, $r$ is the distance between the two objects, and $\hat{r}$ is the unit vector that points towards the direction of the other object.

Suppose that the satellite is a distance $r$ above the surface of the Earth.

This problem is adapted from Serway Physics 9ed. 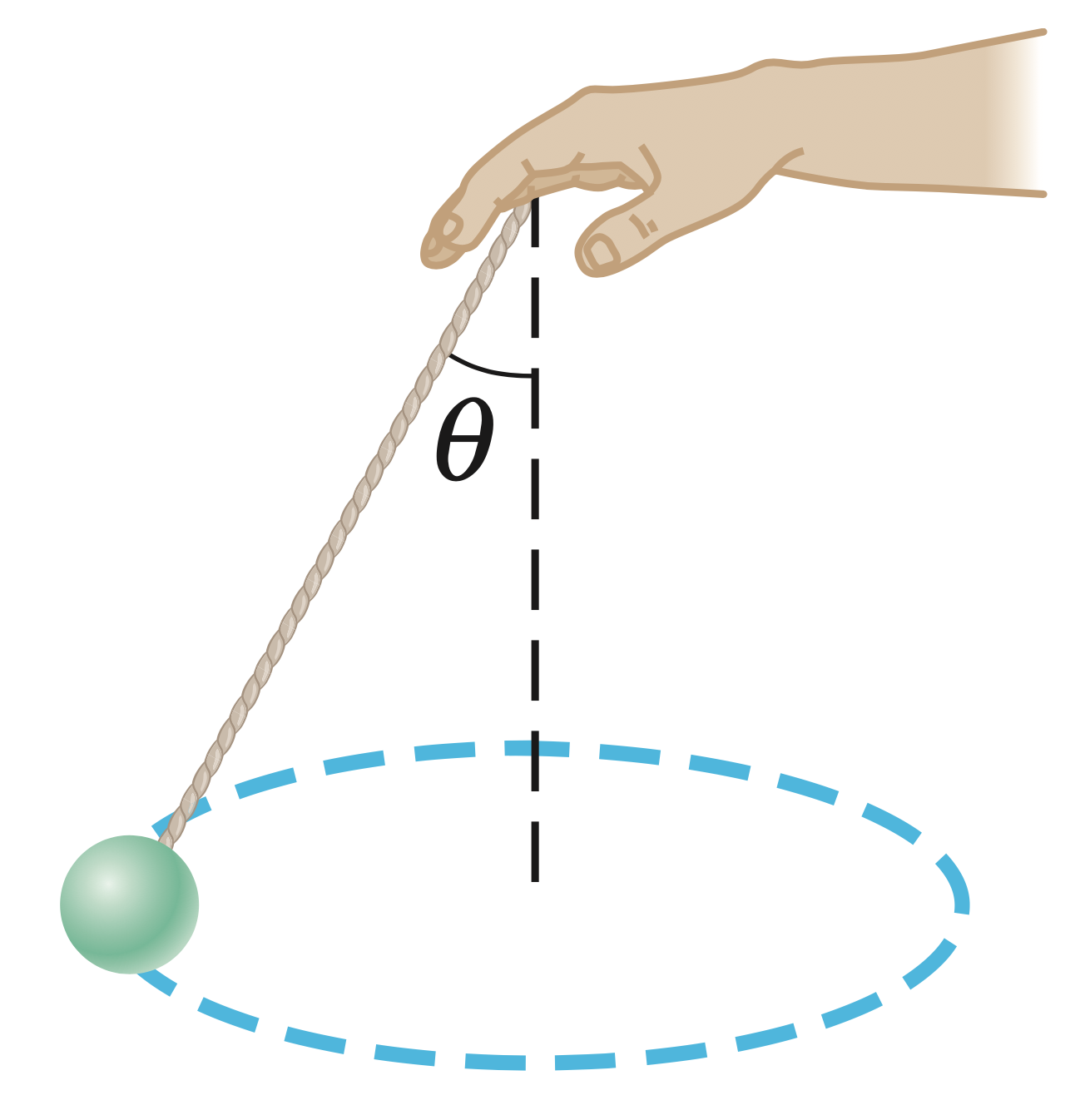