Last time, we asked the question of what happens when we want to find the slope of a secant lint between two points $(x, f(x))$ and $(x+h, f(x+h))$ for some parameter $h$. The slope $m$ of this secant line is

Today, we’ll see what happens as we take the limit as $h\rightarrow 0$. That is, what happens when the two points begin to approach each other? To think about this problem, let’s go back to Problem 3 from last time, where we considered the function $f(x)=x^2$. Let’s evaluate the slope $m$ from above for this function:

We’re interested in what happens in the limit as $h\rightarrow 0$. In this case, this limit is pretty easy to evaluate:

What is this statement telling us? As $h\rightarrow 0$, the secant line starts to become the tangent line that is tangent to the curve $f(x)$ at a particular value of $x$. We call this a tangent line because locally, it only intersects $f(x)$ at one point. The slope of this tangent line is called the derivative. Based on our calculations from above, the derivative, which we’ll denote as $m$ for now, is defined to be 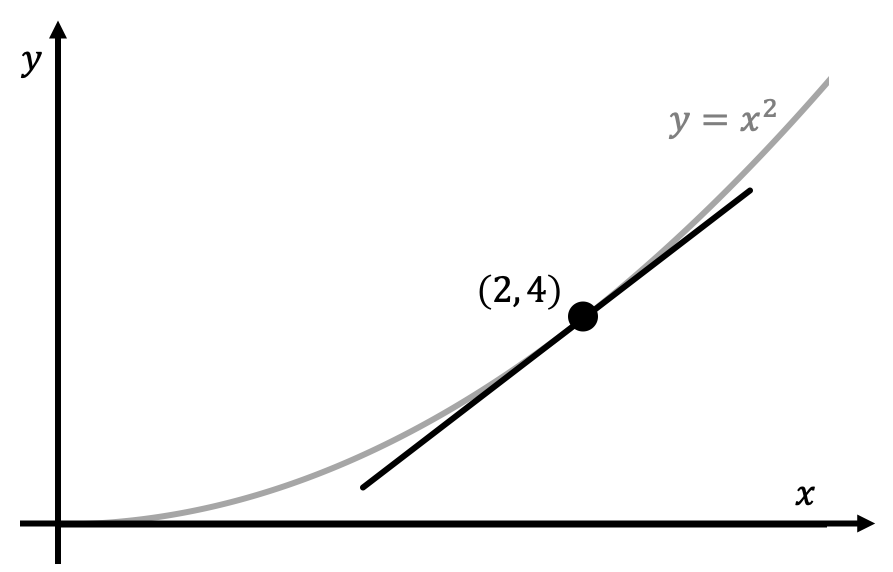 In reality, derivatives aren’t denoted as $m$. There are two common ways to denote the derivative of a function $f(x)$: (1) prime notation and (2) Leibniz notation. Prime notation looks like this:

The presence of a $’$ symbol denotes that we’re taking the derivative of the function. Leibniz notation looks like this:

For reasons that we’ll talk about later, I highly recommend you use the Leibniz notation, but you should be familiar with and able to read/use both types of derivative notations.

Properties of the Derivative

Fundamentally, a derivative is defined as a limit. This means that many properties about limits can also apply to derivatives:

Let’s go back to the first graph of this page where we plotted the function $y=x^2$ and the tangent line of this function at the point $(2, 4)$. Imagine that we zoomed in really close to this particular point $(2, 4)$. Although the tangent line and actual function aren’t necessarily equal, they do look very similar. This can often be used to our advantage to approximate function values that would otherwise be difficult to evaluate. Let’s say that we know the derivative of a function, and also a point that lies on the function:

Using this information, we can derive a linear approximation for the function that’s pretty good close to the point $(a, b)$ on the graph.

The slope in the point-slope notation here is the derivative $df/dx$ evaluated at the particular point $(a, b)$. This result is called the tangent line approximation and can be used to approximate values of $y$ near $x=a$.

A very common type of problem asks you to graph both $f(x)$ and $df/dx$ on the same graph given one versus the other. There are three rules involving the first derivative that you should know:

Let’s go over a simple example to illustrate this. Consider the following graph of the derivative of \(f(x)\): 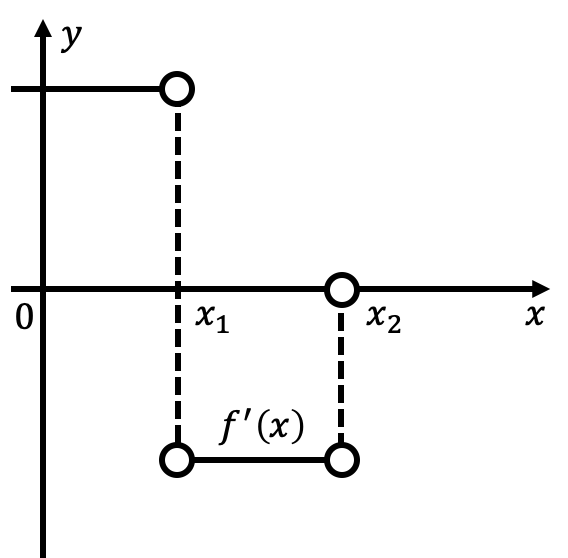 Our goal is to sketch what \(f(x)\) looks like given this graph of \(f'(x)\). For $x<x_1$, $f’(x)$ is just some constant positive number, meaning that $f(x)$ is increasing by the same amount all the time irregardless of the value of $x$ we’re at, so long as $x<x_1$. This corresponds to an increasing linear function. For $x_1\leq x<x_2$, $f’(x)$ is a constant negative number, and so by similar reasoning, this corresponds to a decreasing linear function. For $x\geq x_2$, $f’(x)=0$, and so the function $f(x)$ isn’t decreasing or increasing: it is just remaining at some constant value since its rate of change is zero. Therefore, superimposing the graphs of $f(x)$ and $f’(x)$ together, we might have something that looks like 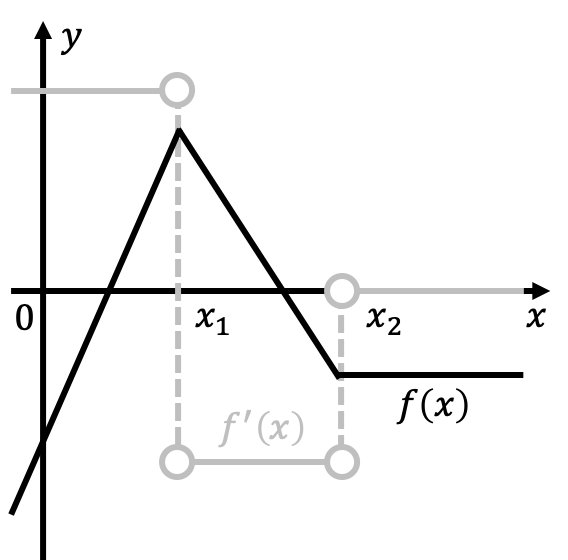 We’ll be able to further improve our graph function sketches once we introduce the notion of the second derivative. Sketching either $f(x)$ or $f’(x)$ (or both) involves practice to get a strong intuition about how functions and their derivatives behave.

The mean value theorem for derivatives (MVT) is a commonly cited theorem in calculus. Assume that we have a function $f(x)$ that satisfies the following two properties:

The mean value theorem states that if $f(x)$ satisfies both of these properties, then there must exist at least one point $x=c$ with $a<c<b$ such that

What is theorem saying? Consider the arbitrary polynomial function shown below: 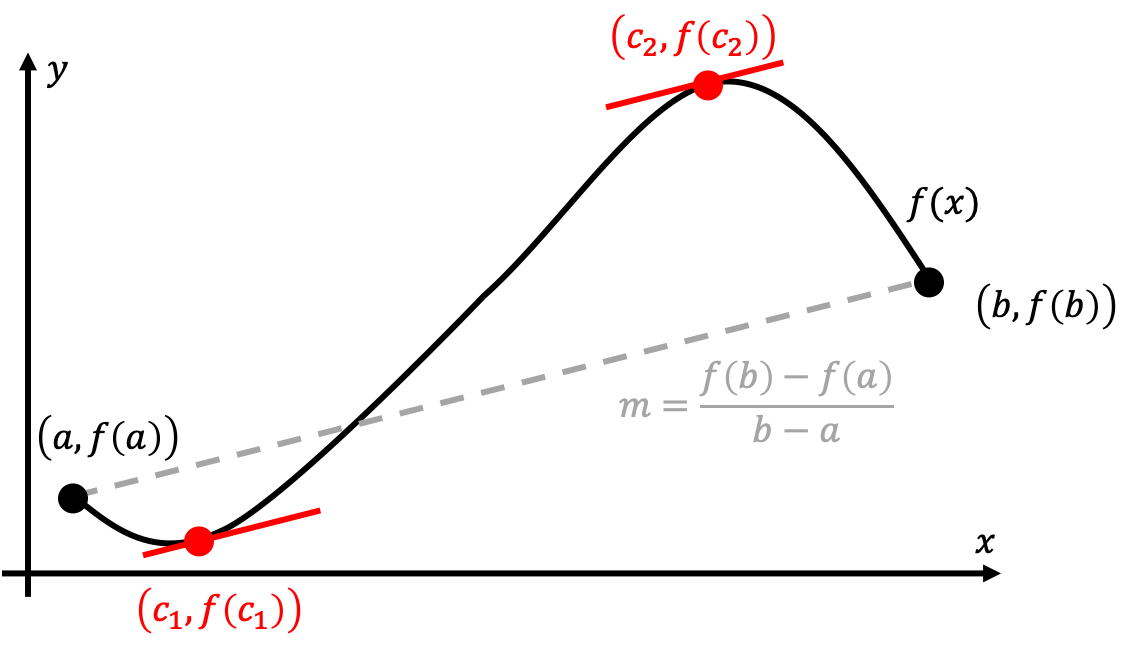 MVT essentially guarantees the existence of at least one point (or in our case, two points $x=c_1$ and $x=c_2$) such that the derivative(s) at the point(s) is equal to the average rate of change along the entirety of the curve. In the figure above, we can see that the two red points have tangent slopes that are parallel to the average slope along the curve, which is highlighted in gray. As we can see, MVT can be though of as the “derivative version” of the intermediate value theorem.

Rolle’s Theorem is essentially MVT in the very special case where $f(a)=f(b)$, and $a<b$. Defined more explicitly, assume that we have a function $f(x)$ defined on the interval $a\leq x\leq b$, with the properties that

If $f(x)$ satisfies all three of these properties, then direct application of MVT that we learned above tells us that there exists at least one point $x=c$ with $a<c<b$ such that $f’(c)=0$, since the numerator of $\frac{f(b)-f(a)}{b-a}$ is equal to zero. This is Rolle’s Theorem. An visual diagram is shown here:

Consider the function $f(x)$ that we graphed above in our discussion involving using the piecewise constant $f’(x)$ function to sketch $f(x)$. This function can also be the derivative of another function, which we can denote as $F(x)$. That is, $dF/dx=f(x)$. Using our sketch of $f(x)$ above, sketch out the general shape of $F(x)$.

Consider a function $y=f(x)$ with a derivative given by

This problem is adapted from the 2007 AP Calculus AB Exam.