In this section, we will talk about dynamic memory allocation in C, including the function malloc() and other related methods.

Consider the following line of code in C.

As we have seen previously, all local variables are stored somewhere on the stack in primary storage, including the variable x above. When compiling the C source code to convert it into an executable, what happens is that the compiler tells the computer to allocate (i.e. set aside) space (on the stack) for this particular local variable. This operation is done before the program executes. In these cases for our standard set of local primitive variables like ints and chars, we can see that we cannot allocate variables through this method while the program is executing. This form of memory management is called static memory allocation.

In C, dynamic memory allocation is accomplished using the malloc() library, which is included in the stdlib.h C library header file. This function

alllocates size bytes of memory from the heap and returns a void * pointer to the allocated memory address. If it happens that the heap has no additional space, then the function returns NULL since the request failed. As an example, malloc() can be used to store a String, which is simply an array of chars in C:

If you are unfamiliar with the strcpy() function, I encourage you to check the documentation out here. This above code would print out This is a string! to stdout.

The C library function calloc() is very similar to malloc() and is also used to dynamic memory allocation, usually for arrays with a predetermined number of elements. For example, let’s say that we want to allocate memory for n array elements that are size bytes each. The calloc() function does this as

realloc() is a standard C library function that resizes the memory block pointed to by ptr that was previously allocated with malloc() (or calloc()). The function

Just as we have to explicitly use the malloc() function to dynamically allocate memory during run time, we also need to dynamically deallocate (or free) memory during run time after we are done with a particular memory chunk in the heap. This is important for good space utilization of computer resources. This is accomplished using the free() function, which is also included in the stdlib.h C library header file. This function

will free a memory chunk previously allocated by a call of malloc(), realloc(), or calloc(). The argument ptr is a pointer to the memory block that we want to free. If NULL is passed in as the argument, then nothing happens.

In the remaining part of this lesson, we will be going over the different memory management algorithms and how malloc() explicitly works “under the hood.”

As always, we’ll imagine the heap as an array of blocks (that are each 8-bytes large on 64-bit systems). Because of various malloc() calls, at any given point, the state of the heap may look something like this, for instance:

Diagram taken from this link. Note that words should instead be quadwords because our blocks are 8-byte aligned.

As you can see here, at any given point in time we might have some sequence of allocated and deallocated “chunks” of memory that can be of varying and unknown lengths (since they are defined by the user). What are our goals for an effective malloc() implementation? There are primarily two things that we’re interested in:

We define the aggregate payload $P_k$ is the collective size of all of the currently allocated payloads after request $R_k$ has been completed. Meanwhile, the current heap size is $H_k$ and is assumed to be monotonically nondecreasing. Our allocator can increase the size of the heap using the sbrk() function, discussed below. The peak memory utilization after $k$ requests $U_k$ is therefore defined as

Our goal in writing a malloc() implementation is to maximize throughput and peak memory utilization. However, as we will see, this can often become quite a challenging task. 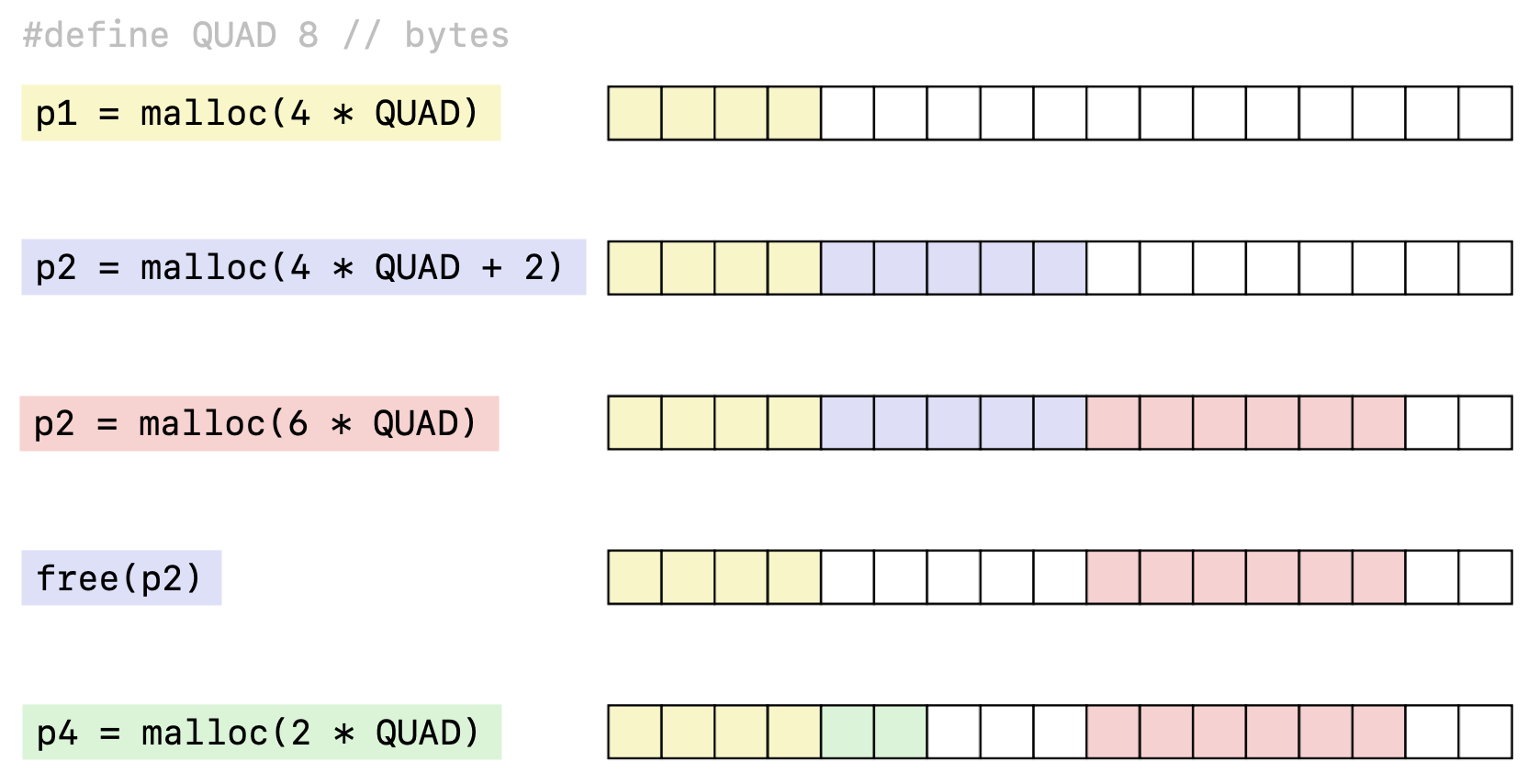 Diagram taken from this link.

Consider the second malloc call for p2 from the example above:

Based on the malloc() argument, we only needed 34 bytes of memory, but the allocator gave us 40 bytes based on the diagram. This is because the allocator cannot give us a “fractional” memory block, because everything must be 8-byte aligned. In other words memory chunks can only come allocated in integer multiples of 8 bytes.

What happens as a result? Let’s take a look at the allocated memory block more closely:

What is happening here is that in this case, padding for alignment purposes has resulted in internal fragmentation because the payload is smaller than the block size, and so there is a chunk of memory 6 bytes large that is being unused. Internal fragmentation can often be caused by:

Notice that internal fragmentation depends only on the pattern of the current and previous requests, and so this type of fragmentation is fairly easy to measure quantitatively.

Contrast to internal fragmentation is external fragmentation, which occurs when there is enough aggregate heap memory, but no single free block is large enough. For example, let’s go back to our previous color-coded malloc() diagram from above:

Diagram taken from this link.

Imagine that after the last p4 malloc() call, we have the following memory allocation call:

This means that we want our allocator to allocate to us a single chunk of memory that is 4 8-bytes large. We have 5 blocks of memory available and certainly have enough space available to satisfy this request, but the problem is that no single free chunk of memory is able satisfy this request, as the only two free chunks above have 3 blocks and 2 blocks, respectively. Because a malloc() call must return a pointer to a single, contiguous memory space, the request will fail. This is an example of external fragmentation.

An allocator must have some way to keep track of the free blocks still available to be allocated. There are a number of different ways to accomplish this, but we’ll discuss the two most basic methods here.

An implicit list works by storing the sizes of each of the chunks of memory in the first 8-byte block of the payload, which we’ll refer to as overhead storage. By knowing how large an allocated or free block is, we’re able to know how far to “jump” to get to the next chunk of memory.

From above, implicit lists worked by allowing us to go through each of the memory chunks one by one and check if each was allocated or not. In contrast to this method, we can have an explicit list of free blocks, which essentially uses something analogous to a linked list to store the free blocks.

For implicit lists, there are three common ways to search through the heap to find the next free block.

As you can see based on these three algorithms, there is often a trade-off between peak memory utilization (space efficiency) and throughput (time efficiency). This makes choosing an “optimal” malloc() implementation often very difficult.

Technically speaking, you could also have first, next, and best fit algorithms as well using the explicit free list, but first fit is probably the most common algorithm when implementing the free list.