What is Assembly Language?

Assembly language is perhaps one of the most low-level programming languages out there. It involves writing instructions for exactly how variables and data types are stored and manipulated by the computer’s central processing unit (CPU), which can be thought of as the “brain” of a computer that executes computer instructions.

Just as each person’s brain is hardwired differently and understands things differently, each CPU processor understands a different assembly language. For example, the class of languages understood by smart phones, which are often referred to as RISCs (reduced instruction set computers) is very different than the class of languages understood by most modern computers, often referred to as CISCs (complex instruction set computers). The actual differences between RISCs and CISCs are not super important for our discussion, but in general, RISCs are more efficient but often have less “words” or commands in their language, while CISCs are more complex and have many more commands in their language.

x86 is one of the most common CPU’s in the market today, and were all based on the first-generation 8086 and 8088 CPU’s released in the late twentieth century. Of course, x86 has its own assembly languages that it uses to understand and run instructions. The reason why x86 assembly language is particular interesting for us to study is that virtually all modern computers have x86 CPUs. In my experiences, I have never come across a single computer that doesn’t run x86. Because it is so omnipresent, we will focus our discussion in understanding x86.

Why is Assembly Language Important?

The vast majority of computer programmers will learn about assembly language once and then never touch it ever again. After all, why would anyone want to learn an arguably complex and difficult to debug language like x86 assembly as opposed to using languages like Python and Java instead? In fact, there are a number of reasons of why every programmer should have at least a basic understanding of assembly language:

Given these important reasons to understand assembly, let’s look at some of the important features of the x86 assembly language.

One Note Before We Get Started

For some reason, there are two “dialects” when it comes to x86 assembly language: the Intel dialect and the AT&T dialect. In general, the Intel syntax is typically used on Windows machines, while the AT&T syntax is typically used on Unix systems, which includes Mac and Linux OS. Because we’re exclusively using Linux (or at least Unix) systems to learn about computer systems, all of our work in x86 will be in AT&T syntax.

The Basics of Computer Architecture

Computers have multiple components to them, including the CPU, primary storage (RAM), and secondary storage (SSD). Each of these serve different purposes:

Of course, the picture gets a lot more complicated than this, but for now, this is the lowest level of abstraction that we need for our purposes.

Pointers are a crucial aspect of the CPU being able to understand where things are stored in primary storage. The RAM of computers is often divided up into two sections: the stack and the heap. In terms of ADTs, the stack can be represented as a stack, while the heap can better be through of a list. However, in both cases, the elements of both the stack and the heap do not have to be restricted to a certain size value. There are a number of differences between the stack and the heap:

There are number of other differences, but these are the main differences. An image of what the primary storage memory can be found here, but basically, the main idea is that the stack and the heap do different things and serve different purposes. (I found the link particularly informative in explaining the purpose of the stack in RAM.)

Pointers are essentially addresses to locations in memory, and tell us the location of where things are stored in the primary storage. We briefly introduced the topic of pointers at the very beginning. Let’s focus on how pointers are used to represent locations in the heap, which is typically what we are most interested in: 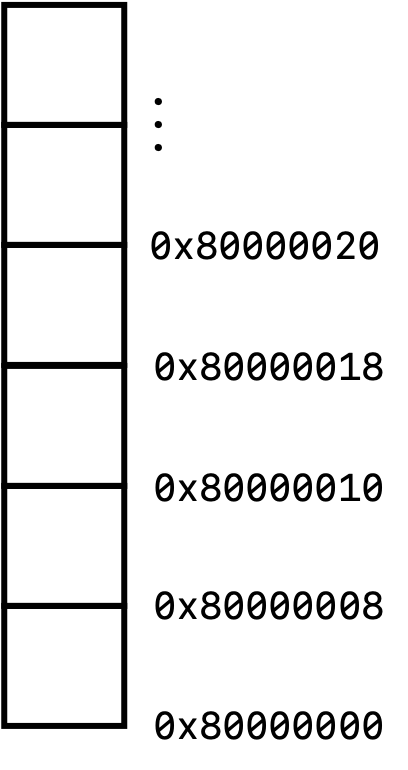 On 64-bit computers (that is, most modern computers), we say that the heap is 8-byte aligned. This means that each “chunk” of memory a multiple of 8 bytes. (On older 32-bit computers, the heap is 4-byte aligned). We can think of each of this little squares as houses with their own individual addresses, given by the 0x8000xxxx` addresses shown in the figure above.

In x86 assembly language, we have a very particular method of referring to the contents of each of these addresses:

This might seem extremely confusing at first, but it will get simpler as we go over a couple of example exercises below.

Because x86 assembly works directly with the individual bits and bytes stored in memory, we are typically not interested in what the actual bits represent or what the variable type is at such a low level of programming. However, we do care about the size (number of bits) of the quantities that we are working with.

Let’s consider an example problem. Consider the case where we have an instruction that says “move $2 to 0x80000008.” Is this instruction moving the value 2 into the least significant byte at address 0x80000008? Or is it moving the 32-bit integer representation of 2 into the least significant 4 bytes at address 0x80000008? Since either of these is a valid possible interpretation, we usually have to explicitly declare which one we are intending. Therefore, we have the following size suffixes:

There are a couple of more advanced operation suffixes, such as s (stands for single) and t (stands for ten bytes), but they are typically rarely used (at least in basic x86 assembly code) and so we won’t really talk about them here. However, you’re free to look up what they mean online if you’re interested.

While it isn’t always explicitly necessary to declare the size suffix in every operation, it’s often good practice to make clear actually what the intent of your operation is and how many bytes you’re intending to work with in a given instruction.

There is one last (and extremely important) topic that we need to discuss before we can start reading and writing x86 assembly code: registers. Registers are essentially temporary memory storages that can be accessed extremely quickly by the computer, and are used by the CPU to directly make computations and what not.

On modern Intel 64-bit computers, there are sixteen different general-purpose registers, and each of them have their own purposes and “memory address” names. We’ll list the different names here: 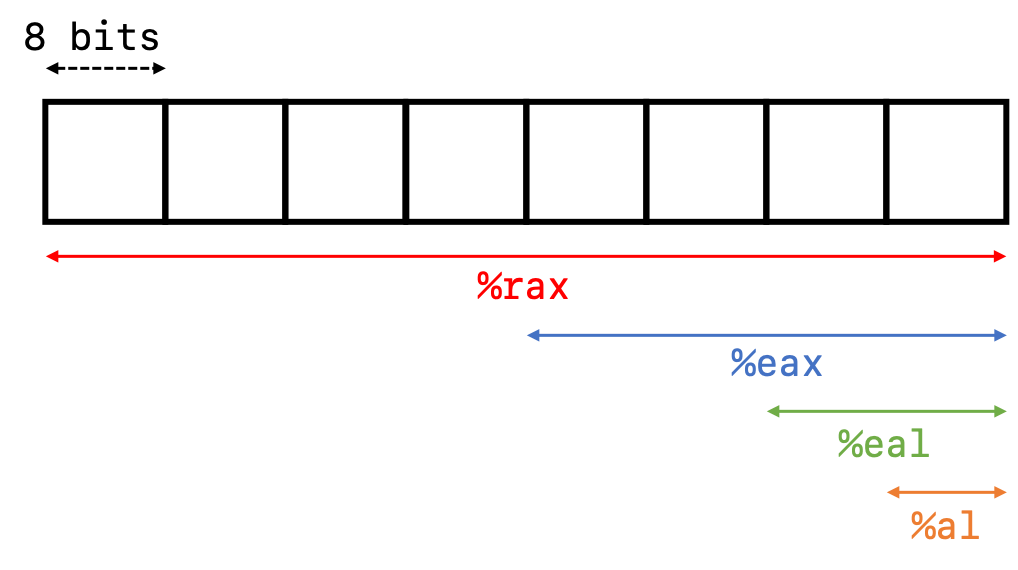 As you can see from this diagram, all registers in x86 are prefaced in assembly code by a % sign. This is what indicates to the computer that we’re dealing with the contents within the register.

Now that we understand what computers look like “under the hood,” we can begin to investigate how to write instructions and manipulate memory and registers and whatnot in the next section.