Some of the sixteen registers have important functions that we should talk about:

Often times, we are interested in storing a pointer to the beginning of an array at a heap memory location, or pointer to somewhere on the stack in reference to the bottom of the stack. In both cases, we often don’t know the “absolute” memory location in these cases of certain objects stored in the memory, but rather their location relative to a reference, such as the pointer to the start of an array or the pointer to the base of a stack stored in %rbp. In order to denote relative memory location, we can use common addressing conventions in AT&T syntax for dealing with point locations stored in registers. The idea is that we can refer to addresses in the heap in the following notation convention:

The base is the base reference memory location, often stored in some register. index can be thought of the array index in an array, and scale is the size of each array element. offset is the offset from the base reference location. In this case, this notation references the primary storage location

This offset notation can also be used to do basic arithmetic! This can be done using the lea command, which we’ll introduce and talk about in the section below. Basically, the instruction looks like the following:

For example, suppose that we wanted to calculate 2 + (5 * 8) - 4, and then store the result into the register %rax. A succinct way of doing this is to use the instruction

The benefit of doing calculations in this way is that (1) it is often more concise, and (2) it performs the calculation without modifying any of the flags in the ALU. Flags are something that we’ll discuss in the sections below.

Here are a list of common x86 assembly commands and their uses.

Sometimes for multiplication and division operations, we need to worry about bit extension. This is because, for example, multiplication of two 64-bit integers can yield a 128-bit integer, and division of two 64-bit integers can yield an incorrect result if the thing being divided is not converted into a 128-bit integer first. This is perhaps easiest to understand in terms of division by a power of two using left shift and right shift operations. We discussed some of the issues with these operations if not considered carefully previously.

At this point, it is also worth noting what the flags are that are stored in the special dedicated FLAGS register. There are a number of them, but we’ll highlight the most important ones here:

Typically, based on a cmp result, we may want to jump to another set of instructions. This is common in implementing iterations and conditional statements.

Once again, we have only grazed the surface of the set of x86 instructions available to us in assembly. While the above represent the most common instructions, you can find the full set in the x86 assembly documentation here.

As we mentioned previously, the stack is an important component of the primary storage, and can be thought of as growing downwards. This means that the “top” where things are immediately pushed and popped is at a lower address in the primary storage than the bottom of the stack. For example, let’s say that we pushed the number 1070, and then 972, and then 256, and then -7 onto the stack. The state of the stack after these four push operations would look something like this: 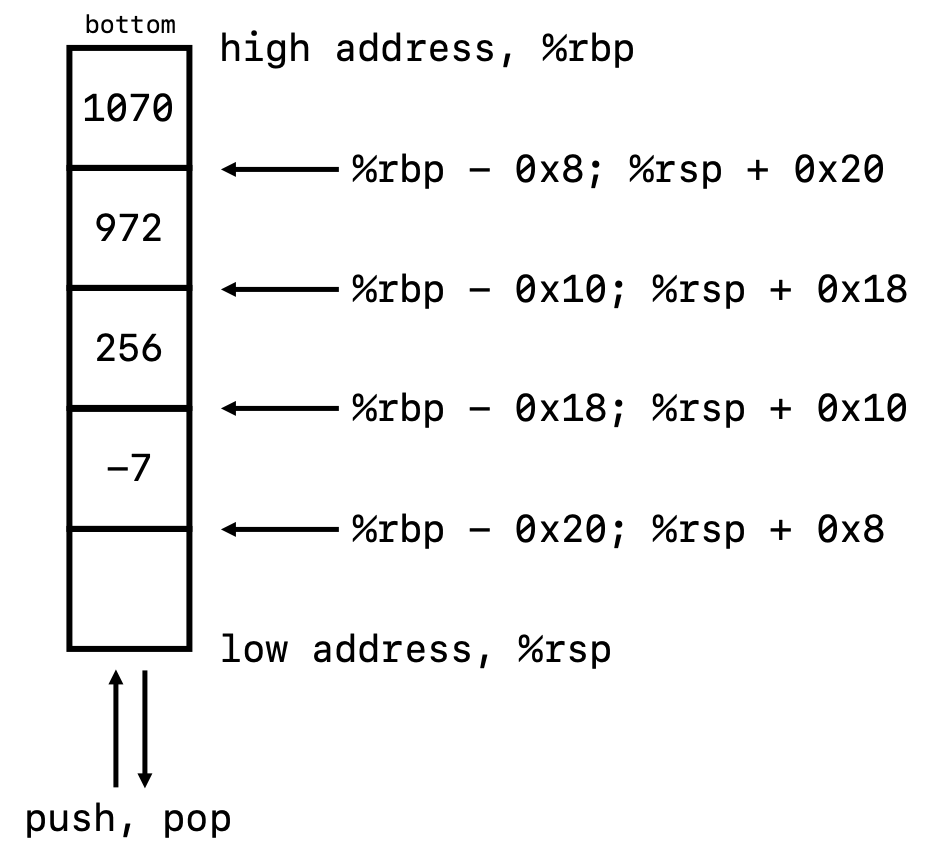 Although the stack is indeed a LIFO data structure, it’s perhaps more appropriate to think of it as a “transparent stack.” What this means is that you’re able to read and write values anywhere in the stack, even if it is not at the top. You just can’t change the order of the elements or remove a stack entry found somewhere in the middle of the stack. For example, using the example above, -0x8(%rbp) would refer to 1070. In this particular case, it would also be equivalent to 0x20(%rsp).

When things are pushed and popped from a given stack frame, it is the %rsp frame that moves automatically with pushing and popping, as %rsp always points to the next free memory space on the stack.

In disassembling C code, you might notice that many assembly functions start off with and end with a similar set of commands:

Let’s figure out the purpose of these commands. Recall that even if we’re in different functions, all of the function in a given C program share the same stack in the primary memory. However, we don’t want the stack data from different functions being jumbled together. This is effectively what these three set of instructions are doing. When we first enter a function, the push %rbp instruction pushes the address of the previous %rbp base pointer onto the stack, and the next instruction essentially resets the stack frame. This process looks something like this:

In this way, the previous stack data from any previous functions remains unaffected by any stack operations made by our current function. This process of pushing %rbp and then moving %rsp to %rbp is called adjusting the stack frame. To finish up the program, pop %rbp will restore the old %rbp with the previous stack data, such that from an outside program function, it effectively looks like the stack wasn’t touched by our function after we exit from the function. This functionality is crucial in order for us to be able to call functions within functions.

Now that we understand the basics of assembly language syntax and what are the typical commands and operations available to us, we can now try to actually read some assembly code and actually write our own as well here.