Let’s review Newton’s Laws that we introduced from last time:

Today, we’ll be talking about systems in mechanical equilibrium and how this relates to these set of laws.

Hanging mass problems are simply trigonometry problems in disguise. A common setup might look something like this: 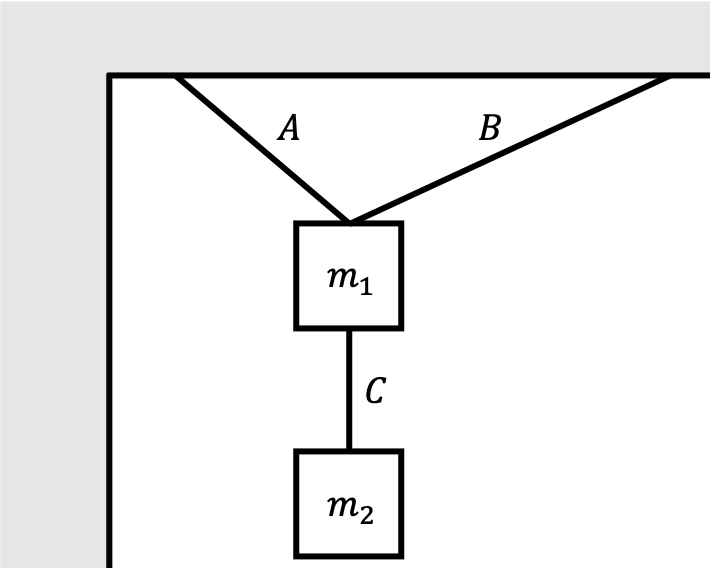 What’s happening here? Ropes $A$ and $B$ are holding the weight of two objects of masses $m_1$ and $m_2$ from the ceiling. Rope $C$ holds $m_1$ and $m_2$ together. Because of gravity pulling on the blocks, the ropes have tension that are pulling on them, which are therefore also pulling on the blocks in order to prevent them from falling from the ceiling. Usually for these problems, we assume that the ropes are massless. A common problem might ask you to solve for the mass of one of the objects given that you know the tension force acting on the objects, or vice versa. To study this system more carefully, we construct a force diagram for the objects of interest. Force diagrams (sometimes called free body diagrams) are simply diagrams that illustrate all the different forces acting on an object. Let’s consider the force diagrams for both masses $m_1$ and $m_2$: 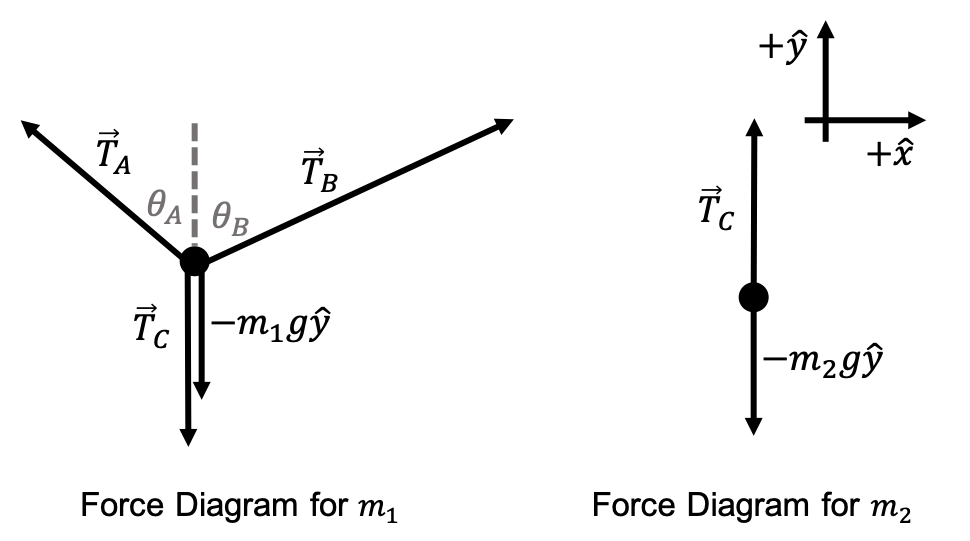 Because none of the masses are moving, we know that our system is in mechanical equilibrium. This means for both of the blocks individually, $\sum \vec{F}=0$:

Of course, these equations aren’t really useful to useful to us in vector notation. We have to break them down to their $\hat{x}$ and $\hat{y}$ components. This gives us four equations:

We can solve these equations for any combination of $T_A, T_B, T_C, \theta_A, \theta_B, m_1, m_2$ according to the exact specifications of what a given question is asking. This illustrates the general pipeline of how to approach these problems:

Masses on a ramp are another common type of classical physics problem. The idea is you have some block (or blocks) that’s resting on an inclined plane, and we want to study the system’s properties. For example, at what angle of the inclined plane will the block begin to slide off the ramp? A diagram of the setup might look something like this:

While this ostensibly looks like a simple problem, it introduces a lot of new concepts that are worth talking about. We took the liberty of also setting up the force diagram for the single mass $m$ of the system. There are a number of things that are different about this system compared to the previous example:

Once again, we have a system that’s in mechanical equilibrium since nothing is moving. So, all we have to do is balance the forces in the $\hat{x}$ and $\hat{y}$ directions separately.

Solving this system of equations gives us

This effectively describes our system as long as the static friction $\vec{F}_f$ is less than the “transition point” maximum friction magnitude (meaning we want $\theta$ to be small).

Consider a single mass $m$ hanging by two massless ropes $A$ and $B$. 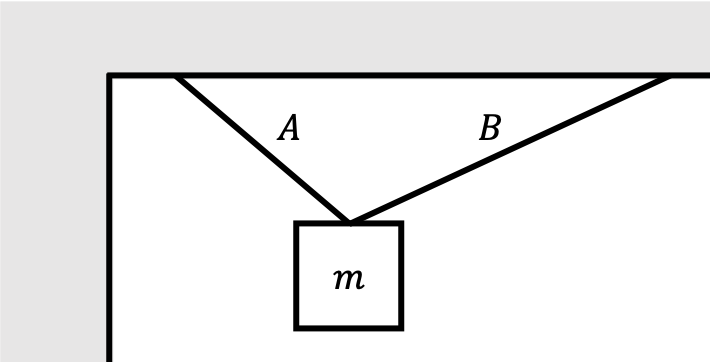 Consider a very strong man trying to push a block up a frictionless incline plane. 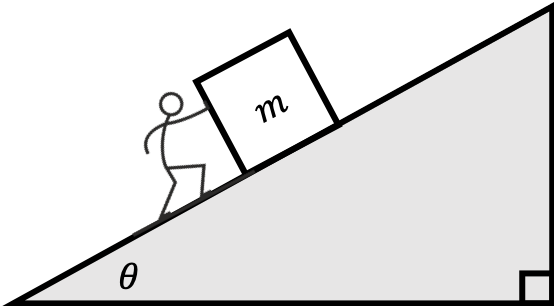 Repeat parts 1 through 4 of Problem 2, but this time, do not work in a slanted coordinate system. Confirm that the magnitude of both the normal force and force required by the man are the same as those you calculated in Problem 2. This validates our ability to work in whatever rotated coordinate system is most convenient to us.