Imagine that we have two cars that are traveling head on and collide with one another. Hopefully you don’t have personal experience with this, but the result of such a collision is often catastrophic if not deadly. Compare this with, say two ants that are traveling head on and accidentally bump into each other. I can hardly make the conclusion that the ants will be only slightly inconvenienced at most. Physically, these two collision events are the same, so why are their outcomes so extremely different?

In today’s lesson, we’ll be exploring the answer to this question in our discussion on collision problems, and the related physical quantity of momentum.

Let’s go back to our comparison between the head-on car collision versus the head-on ant collision. Intuitively, we might expect that the outcomes between these two events are drastically different because of how difficult it is to stop each of the moving objects in each of the two cases. In particular, a car traveling at 60 mph is much more difficult to stop than an ant traveling at 0.01 mph. In order to quantify how difficult it is to stop a particular moving object, we can define some physical parameter to represent this “difficulty.” Let’s call this parameter momentum.

The next step is to figure out a mathematical definition for momentum. In terms of the physical quantities, we can also compare what are the differences between the two situations. One difference is that a car is much more massive than an ant, and another difference is that a car is also traveling much faster than an ant. Other than that, these two systems are essentially physically identical. This tells us that the momentum can be accurately defined in terms of both the mass $m$ and velocity $v$ of an object to quantify how difficult it is to stop it.

This motivation gives us the following definition of the momentum $\vec{p}$ of an object:

Note that if we assume that the mass of the object remains constant over time (which is typically a fairly good assumption), then we can write the following by starting off with the definition of the net force from Newton’s second law, and then using the fact that acceleration $\vec{a}$ is the first time derivative of the velocity $\vec{v}$.

Therefore, we can conclude that

This gives us an easy way to relate the net force acting on an object and the object’s momentum. The net force is the time derivative of momentum.

Let’s define $p=\vert \vec{p}\vert$ to be the magnitude of the momentum vector of an object. Because $p=mv$ from the definition of momentum, we know that $v=p/m$. Plugging this into the definition of kinetic energy gives

We now have two definitions for the kinetic energy of an object: one that involves the velocity $v$, and one that involves the momentum $p$. Both of these formulas should give us the same result, so you can use either one when approaching a particular problem (although depending on what information is given in the problem, one formula might be easier than the other in some situations).

Often times, especially when two objects are colliding, we’re interested in how the momentum changes over a set period of time. We define the impulse $\vec{I}$ delivered to an object over a time interval $\Delta t = t_f-t_i$ by

Clearly, from this equation, we can see that the impulse of the force acing on an object equals the change in momentum of that object. This is referred to as the impulse-momentum theorem.

In any system (meaning any collection of objects), the total momentum is always conserved in the absence of any external forces. The fact that the momentum of a system is conserved is very important for when we talk about collisions below, but it is true for any system.

The reason why total momentum is conserved in the absence of any external forces is simply due to a result that we provide earlier above:

If there is no net external force, then the right hand side of this equation is equal to zero, and so

This tells us that the total momentum of the system is independent of time, meaning that it is a conserved quantity.

Now that we have the basics of momentum and impulses established, we can talk more quantitatively about collisions. Let’s start with the simplest case of two objects traveling towards each other in one dimension.

The total momentum of this system prior to the collision is

The negative sign for the momentum contribution from $m_2$ is due to the face that $m_2$ is traveling in the $-\hat{x}$ direction. The subscripts $i$ signify that the velocity quantities are the initial quantities prior to the collision.

At this point this is the furthest we can go. This is because there are two separate types of collision problems that we need to consider separately: inelastic and elastic collisions.

This equation allows us to solve for \(v_f\) in terms of the masses of the objects and the initial velocities:

Using this result, we can also calculate the total loss in energy $\Delta U=U_f-U_i$ in the system, assuming that the only type of energy that we need to account for is kinetic energy.

If we plug in the expression for $v_f$ from above and simplify algebraically, we get that the loss in energy is equal to

Because energy is conserved, we have the following equation relating the kinetic energies of the masses both before and after the collision:

We can rewrite this equation in the following way

Therefore, our system of equations that fully describes the system is

Often times, we are trying to solve for two of the variables in terms of all of the other variables in the problem. Perhaps the most common application is solving for the outgoing velocities of the two objects, $v_{f, 1}$ and $v_{f, 2}$.

Recall from our work on analyzing systems in mechanical equilibrium that we were able to tackle an $n$-dimensional problem by splitting it up into $n$ $1$-dimensional force balance problems. Since momentum $\vec{p}$ is also a vector, the same approach can be applied here: simply balance the appropriate vector components of the momentum vectors before and after the collision.

This problem is adapted from Caltech’s Physics 1a course.

A marble bounces regularly down a long flight of stairs, hitting each step with the same speed and at the same distance from the edge, and then bouncing up to the same height $h$ above the step, as shown in the figure below. 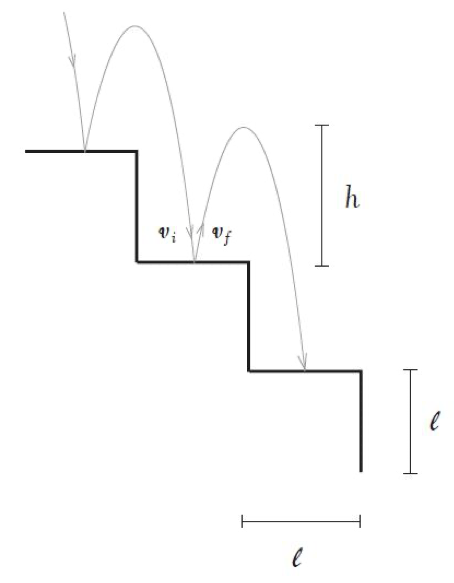 Each stair has the same height and depth $\ell$. The horizontal component of the marble’s velocity is constant throughout, but the stairs have the property that $-v_f/v_i=e$, where $v_i$ and $v_f$ are the vertical velocity components just before and just after the bounce respectively, and $e$ is a constant $0<e<1$.

This problem is adapted from Serway Physics, 9ed.

A railroad car of mass $M$ moving at speed $v_1$ collides and couples with two coupled railroad cars, each of the same mass $M$ as the single car and moving in the same direction at speed $v_2$. All of the cars are moving to the right before the collision.

This problem is adapted from Caltech’s Physics 1a course. 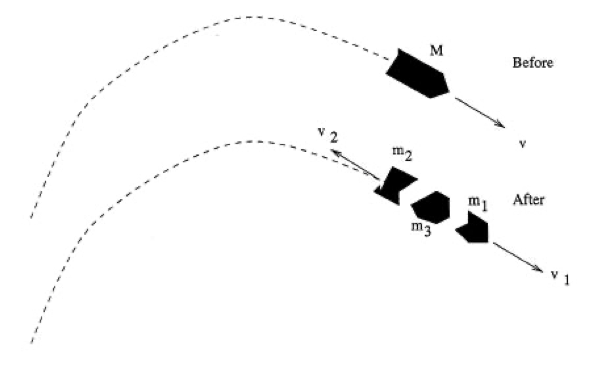