Over the three teaching modules, we have focused on how to adapt our mathematical formalism for translational, linear motion to rotational motion. We introduced the following rotational analogs for common translational physical quantities:

As suggested by the table, there is one more quantity that we need to discuss: angular momentum, which we will see is the rotational analog of linear momentum $\vec{p}=m\vec{v}$.

Recall the central definition of linear momentum that we introduced previously:

In other words, we managed to show that the net force acting on a particular object is equal to the time derivative of the momentum of the object. To continue our analogy between translational and rotational motion, we shall define the angular momentum of an object $\vec{L}$ in a following manner. Since the net torque is the rotational analog of the net force, we hypothesize that

where $\vec{L}$ is our vector quantity referred to as angular momentum. It turns out that this simple definition is sufficient for us to derive a number of useful expressions and properties about this physical quantity.

The magnitude of the angular momentum vector of a particular object can be calculated two different ways. The first method is to use Newton’s second law with regards to rotational motion, which is that the net torque acting on the object is equal to the object’s moment of inertia $I$ multiplied by its angular acceleration $\vec{\alpha}$. Therefore, we can conclude that

Integrating both sides of this equation gives

where we have made the assumption that the moment of inertia is not changing with respect to time, and so it can be pulled out as a constant factor out of the integral. By definition, the integral of angular acceleration is angular velocity, and so

Note that from this definition of angular momentum and the definitions of the moment of inertia $I=mr^2$ and $\omega=v/r$, where $v$ is the tangential velocity, we can also rewrite the right hand side as

What is $\hat{\omega}$? Recall from our rotational motion conventions that $\hat{\omega}=\hat{z}$. From our knowledge of cross-products, we know that $\hat{r}\times\hat{\theta}=\hat{z}$. $\hat{r}$ is the direction of the position vector $\vec{r}$, and $\hat{\theta}$ is the direction of the tangential velocity vector $\vec{v}$ (since the object is presumably undergoing circular, rotational motion). Therefore, we can conclude that

Although we can use either one of these formulas to calculate $\vec{L}$, typically one will be more convenience to use than the other. The choice of which formula to use typically boils down to what information is given in the problem or most easy to calculate. If the moment of inertia is given, often times the $I\vec{\omega}$ formula will be easiest. Otherwise, $\vec{r}\times\vec{p}$ is a good choice.

Based on the hypothesized relation between angular momentum and torque from above, we can conclude that

The angular momentum $\vec{L}$ of an object acts in the same direction as the net torque $\sum\vec{\tau}$ acting on the object.

The units of angular momentum can be easily figured out using the definition of this quantity from above. We will denote the units of quantity $x$ as $[x]$.

In this section, we’ll briefly walk through an example problem on calculating angular momentum. Consider a system of two masses, each of mass $m$, connected by a massless rigid rod of length $2\ell$. The two masses are rotating around the origin at the center of the rod. After some time, the rod suddenly contracts to length $\ell/2$. Our goal is to calculate the angular momentum of the rod both before and after the contraction. 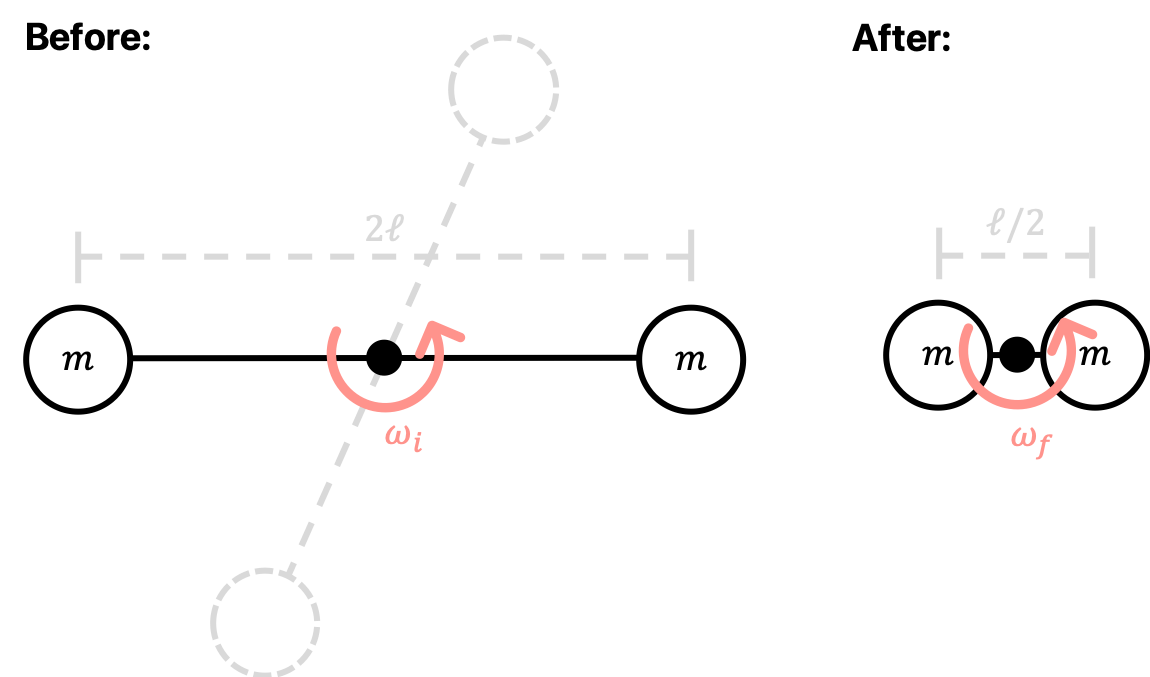 Before the contraction, the angular momentum is given by

After the rod length contraction, the angular momentum is given by

Suppose that the net torque on an object is zero, such that $\sum\vec{\tau}=0$. Based on the definition of angular momentum from above, we can conclude that in this special case,

This tells us that in the absence of any external applied torque, the angular momentum of a system is conserved and a constant with respect to time!

For example, let’s go back to the example from above. There is no externally applied torque acting on the system: all that is happening between the “before” and “after” is that the length of the rod magically contracts. Therefore, we can conclude that angular momentum is conserved in this system. Equating the angular momentum before and after that we calculated from above, we have

This problem is adapted from Serway Physics, 9ed. 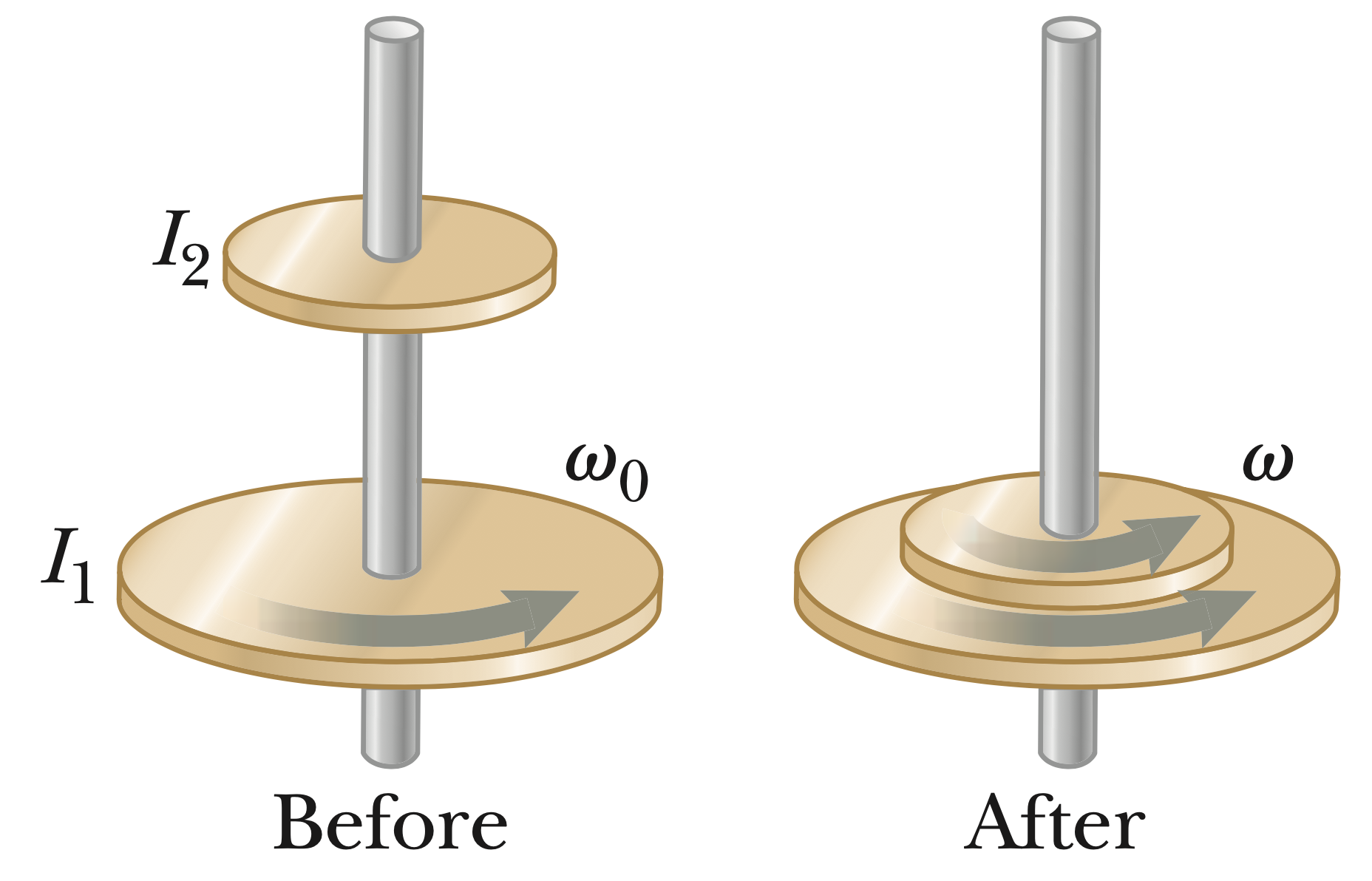 This problem is adapted from Caltech’s Ph1a course. 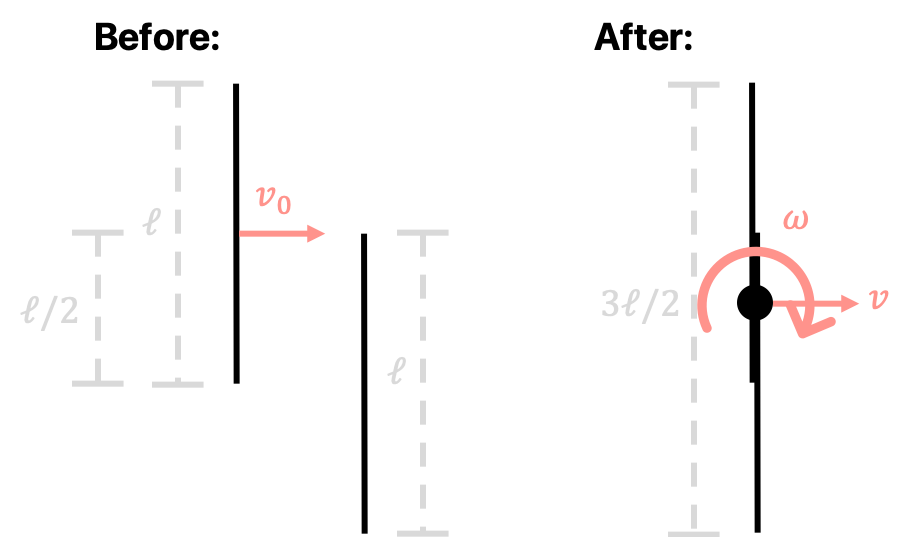 Two equal, uniform, thin rigid rods of each of length $\ell$ and mass $m$ collide and stick together, making a composite rod of length $3\ell/2$. Initially, one rod is at rest while the other approaches with speed $v_0$ perpendicular to both rods.

This problem is adapted from Caltech’s Ph1a course.

A mouse of mass $m$ runs in an exercise wheel of mass $M$ and radius $R$. The mouse runs at constant speed $v$ relative to the wheel. The wheel has a damping torque proportional to its angular velocity given by $\vert \tau_{\text{damp}}\vert=k\vert \omega\vert$, where $k$ is some positive constant and $\omega$ is the angular velocity. The damping torque can be thought of as a “friction torque” that opposes the direction of angular motion. 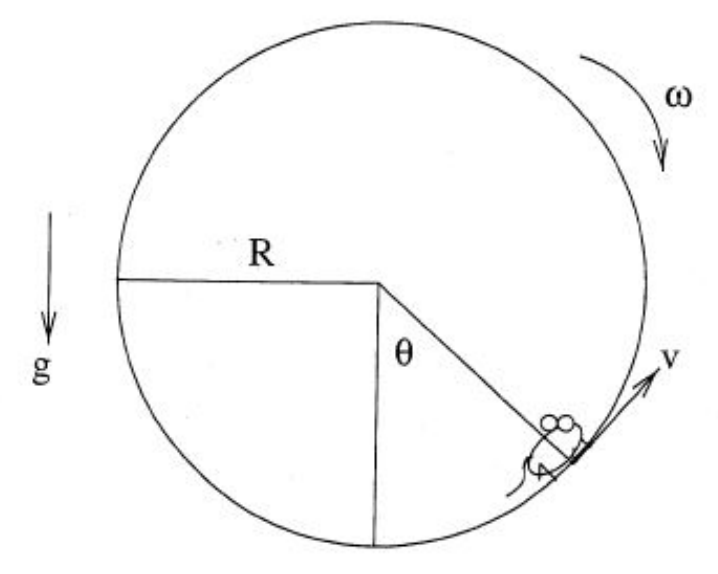 This is a challenge problem and adapted from MIT Physics.

A spaceship is sent to investigate a planet of mass $m_p$ and radius $r_p$. While hanging motionless in space at a distance $5r_p$ from the center of the planet, the ship fires an instrument package with speed $v_0$. The package has mass $m_i$ which is much smaller than the mass of the spacecraft. The package is launched at an angle $\theta$ with respect to a radial line between the center of the planet and the spacecraft. For what angle $\theta$ will the package just graze the surface of the planet?